I was at Opera Bar, minding my own business, sipping on an ice cold Bohemia Obscura. It had been an afternoon of the regular meandering and eating whatever looked tastiest lining the street corner in Mexico City's Centro Historico. I had slipped in to avoid another tempting museum gathering, there are more museums than buildings in this area, even when its not a museum the restuarants will have hand painted murals and brilliant collections by Orozco, Riveria, Khalo, and other usual suspects of Mexican art decadence, it is both brilliant and hard to escape, sometimes your eyes simply need to stare at something less cataclysmic, like a Purell dispenser tacked to the wall of the entrance of one of the oldest and most heralded establishments in DF.

So there I was, trying not to make eye contact with the fellow anglophiles sitting on the barstools across from me. But alas, one of them goes off to the facilities, and the other strikes up conversation. He is a Japanese businessman of some important sort, and the other guy, I find, is his interpretor for his few days here in DF. He craps on about his high up architectural position in a prestigious Paris firm and how he is here on important business, his firm lining up plans for new buildings all over Mexico City. His interpretor comes back, like so many Mexicans you meet, he is always willing to listen and provide help in any way. I tell him how much i am enjoying the street food all over the markets and stations and where ever you seem to be, there is some one cooking up something, from fresh fried potato crisps, blue corn quesadillas, el pastor tacos, tortas, tomales, chillified candies, everything imaginable, well, except salads... you can't find a good quality salad without going in search of one.

Miguel (the Mexican translator), tells me that if I'm interested in food, I have come at the perfect time for the Mexican National Dish, Chile en Nogada, which is only available seasonally from the end of August until the beginning of October. Like many locals here in DF, their willingness to help you and show you the best that this city has to offer travels through miguels viens heavily. He is immediately on his iphone, searching for me. what for, I dont know exactly. Then he is excusing himself from his Japanese counterpart, getting on the phone with one of his friends. He tells me that he is finding out where the best Chile en Nogada in the city is.  I am trapped for a few minutes, furthering my knowledge of how great it is to be an architect in Paris and how tomorrow morning some poor bastard will be sitting beside this Japanese guy in first class all the way back to Paris, his knowledge will be far more extensive than mine in the field of how important this fucking guy is. He will be a professor in the field, perhaps earning his PhD before the plane lands safely at Charles de Gualle. Not to worry, Miguel is back, asking for use of my moleskin and pen. He quickly goes to work, writing it all down for me as it is being dictated to him over the phone: 'chile en nogada...independence day...el grito...la poblanita...colonia san miguel chapultepec...'

The architect seemingly not liking the attention being paid to me from Miguel, slides his beer aside, takes his blazer in hand and heads for the door, Miguel wanting to discuss further details with me, has to cut himself short. "What-a-dick" I murmur to myself quietly as they descend out into the street. They leave the door wide open, and sailing in comes the sounds of a Beatles cover band playing across the corner of the cobble street. I laugh and think about how yesterday when I wandered past there was a trio playing Doors covers, now today Beatles, what's for tomorrow? Hopefully a four piece Zeppelin. 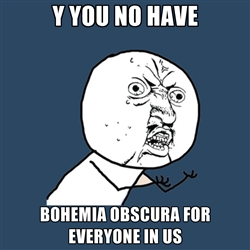 I drown myself in a few more of these Bohemia Obscuras. At 5.5%, they go down dangerously smooth, i accompany it with some papas a la francesa (the cheapest option in almost any drinking establishment, though you will have to ask for it, it is unlikely to appear on the menu...) Opera Bar is not the place to come to for a few cheap ones, its has a much more relaxed, regality to it, like something expertly hacked right out of Champs Elysees and placed amongst slowly sinking and crumbling buildings. The decor, highly Francophonic as well. It makes sense that Miguel took his Nipponese Parisian here. But at 37 Pesos ($2.80US) per Bohemia, you are paying for your surroundings and the cordial barman in his suit and bow tie.


The house Mariachi band comes out of the woodworks. I cease scribbling in my moleskin. Sink back the remainder of my Bohemia, pay the cordial man, and head for the door. First getting a good squeeze of that Purrell. And off i get, to find the best Chile en Nogada in DF. Little did i know it would be even better than that!
Posted by david pants smarty at 14:48

Want some a these ?

david pants smarty
ALLOVER, EARTH
i'm a writer. and a sometimes chef. and i love to drink. and eat my way around this little planet of ours. i have made it a personal duty to take in my surroundings, investigate and allow you, the reader, to EAT! what my words tell you to EAT!