El Mejor Chile En Nogada Del Mundo M.R.
Endless walking. It was a little bit off the beaten track and the map that I was carrying around in my back pocket. I find the place. La Poblanita de Tacubaya. I take a seat on the colourful terrace and a  rather extensive menu presents itself, though I already know what I was coming for. The Chile en Nogada. I cant seem to resist ordering a plate of the mole as well. I see a few plates being sauntered out to my surrounding tables and it looks irresistible in all its dark, rich glory. In my clumsy, unpractised Spanish, I order the the Chile en Nogada and the Mole Rojo with chicken thigh. Chicken thigh is always the way to go in a stewed dish, its fat content provides for a more succulent taste than the dry snooze festival that is chicken breast. The slick haired waiter takes my order, seems a bit perplexed, perhaps even more than I feel when attempting to communicate with him. He returns a moment later and presents the Executive Chef Adalberto Diaz Laredo. His english is near perfect. He stands proud and attentive, 'I'm sorry, I just want to know why you order two main dishes for just one person.' He is calm, collected and more polite than any chef I have ever encountered anywhere on earth!  It seems that he cant understand why one person would order so much food. He seems rather pleased with my explanation that I ordered both dishes because, first, I was told it is the best Chile en Nogada in Mexico and second, the Mole on recommendation of his claim that it was the best in Mexico City, well,  according to both the menu and the bottom of the sign out on the side of the building anyway.

The decor is colourful and welcoming, perhaps a bit over the top. Like a picture out of some strange American version of what a Mexican restaurant should look like - chairs and table clothes of reds blues oranges pinks purples greens. The walls and ceilings draped with Mexican paraphernalia. Of course all of this is not some kind of sick Americanised nightmare of Mexico gone wrong, it's all in relation to the Mexican independence day, El Grito, though is celebrated on 16th of September, seems to linger everywhere for the entire month and even gets squeezed into the first days of october until the decore is quickly exchanged for the skulls and oranges and blacks and whites and ghosts and hullabaloo of dia de los muertes.

The food comes quick, as it should, a quick glance in at the kitchen and everything is running like clock work in there. Plenty of chefs, all dressed in white. Clean. Professional. Even wearing complicated and understated neckercheifs! A highly uncommon sight in any Mexican establishment, though not always a true tell sign of quality eating. Some of the best food you can eat will be cooked street side by a guy in a sweaty, grease stained Dallas Cowboys  t-shirt under a dirty apron. The slicked waiter brings out my two plates. They are more than just a main size. Now i suddenly realise the reason why both the waiter and executive chef were concerned about my order. Each dish is enough for two people handily.

The mole is the richest, by far, that I have tried. The chocolate has this mouthwatering dark, bittersweet undertone, which allows the fragrant spices of the rich thick sauce to dance freely upon your tastebuds. Which is followed up with a subtle chile taste that diminishes the sweetness and prepares the palate for another mouthful. An excellent combination. And as per prediction, the chicken thigh is both moist and full of flavour. Another win for the dish, though I imagine you could shove yesterdays composte pile under the Mole rojo and it would taste equally as delectable. The Mole is topped, as per tradition, with toasted sesame seeds and side with a spiced carrot rice, which again helps the palate in contrast to the the rich sweetness of the sauce.

The Chile en Nogada is a lively and spectacular feat of culinary and Mexican excellence. Made for its colours of green (the chile poblano), white (the walnut cream), and red (fresh pomegranate kernels), to symbolise the country's national colours in pride of El Grito. The Chile en Nogada was originally made by the Madres Contemplatives Agustinas of the convent of Santa Monica in Puebla when the General Agustin visited the city after signing the treaty of independence. The nuns of the Santa Monica convent used their freshest ingredients, the walnuts and pomegranates, which both come into season at the end August, along with the best local chile, the poblano, to concoct a dish worthy of the general and symbolic of the newly obtained independence.

The Poblano chile, is grilled and peeled, and in the case of Chile en Nogada, it is mild in taste and only the very largest and best shaped chiles are selected. Once they are ready, one or sometimes two, depending again on the size factor, are stuffed to the brim, to near explosion actually. This magical stuffing consists of nearly 50 ingredients. The cornerstones of this mix being beef and pork mince with three types of beans, onion, banana, apple, pear, almond, acitron, cinnamon and tomato. The result is a very sweet, rich and fragrant taste which is complimented brilliantly by the walnut cream and the garlic infused rice (an invention from Chef Adalberto). The walnut sauce, is a simple yet rich sauce that has a slight french injection to it, again courtesy of Chef Adalberto. Made from Nuez de Castilla (Mexican walnuts, which obtain a slightly different taste from your ordinary everyday walnut), fresh sheep milk cheese, milk, cream and a good splash of brandy, gives the sauce exactly the richness it needs.The pomegranate providing a bit of bitterness and texture to the dish. Without the pomegranate the dish would be lacking some much needed body and texture on the palate and is liberally distributed upon the plate. Otherwise it would be like eating a big old sloppy, meaty, creamy mess, not that there's anything wrong with that when it tastes like this one! The nicely shaped deep fried platano (banana), tops the plate in order to symbolise the Penacho, a native Aztec head dress, that you generally see older male natives wearing as they prepare for El Grito with traditional native smoke ceremonies and dances in the Zocalo. And of course rounding off the dish is a little mexican flag flying strong on top of the white covered mountain of stuffed chile Poblano. Cheesy? Yes. Patriotic and definitely Mexican? Yes.

They were definitely right, I eat only half of each dish, perhaps even less than half. Still the best meal I have had in D.F. Executive chef Adalberto Diaz Laredo comes out and discusses himself and each dish with me. The conversations takes some interesting twists and turns, diving into Mexican tradition, modern gastronomy, politics and even Iron Chef. Adalberto trained initially in Washington DC but came back before the completion of his culinary diploma and started working at La Poblanita when he was still 18. And now, at 28, has been the executive chef for the past six years. He has championed the best Chile en Nogada, according to, well, the planet. Yes, that's right, his Chile en Nogada received the prestigious, El Mejor Chile en Nogada del Mundo MR! Pretty, pretty, pretty impressive. He claims the secret to his success here at La Poblanita is from treating his kitchen 'like a therapuetic laboratory' in order to enhance the quality of these traditional classic dishes that La Poblanita has been serving since opening in 1947, some 37 years before Adalberto's birth. 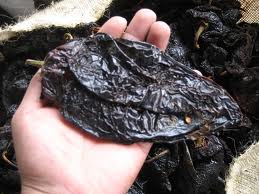 He tells me the secret which sets his mole apart from the Jose-blo junk you might get elsewhere. The mole chillies are picked and cut and dried from fresh right on the very farm where he gets them from. It creates a more divided taste in the dish. First the sweet of sugar and chocolate, next the palate pleasing taste of 57 different herbs and spices that make up the rich taste of the mole, then followed by the spiciness of these specially picked and dried chillies to finish the palate. 'It's a taste you dont ordinarily get from your average mole because they buy the cheap dried chillies from the stalls at the mercad.' Adalberto claims. And his claim is the truth! All you have to do is order Mole rojo elsewhere and it will start sweet and end sweet on the tongue.
The Acitron, is one of the most interesting ingredients in the Chile en Nogada. At first taste, I thought it to be pineapple which had been either soaked in sugar or half candied, then stewed with the meat mixture and taken on a bit of its flavour. It has a very distinct taste and texture, and is necessary in the dish, again to keep it from being too goopy and sloppy (in conjunct with the pomegranate). Adalberto explains that Acitron is becoming subject to a bit of controversy in Mexico. It seems that it is slowly becoming extinct. And less and less people are farming the Biznaga Cactus (the pulp from which Acitron is made), it in its native Oaxaca region. Because of this it has been considered an endangered species according to State laws and is now illegal to take or destroy wild Biznaga Cacti. The result, it is increasingly becoming harder to source for chefs and bakers. So perhaps the Chile en Nogada, in its traditional taste and form will not be around for future generations. And for Mexico, whose people are so steeped in tradition and pride of country, this would truly be a loss.

Want some a these ?

david pants smarty
ALLOVER, EARTH
i'm a writer. and a sometimes chef. and i love to drink. and eat my way around this little planet of ours. i have made it a personal duty to take in my surroundings, investigate and allow you, the reader, to EAT! what my words tell you to EAT!